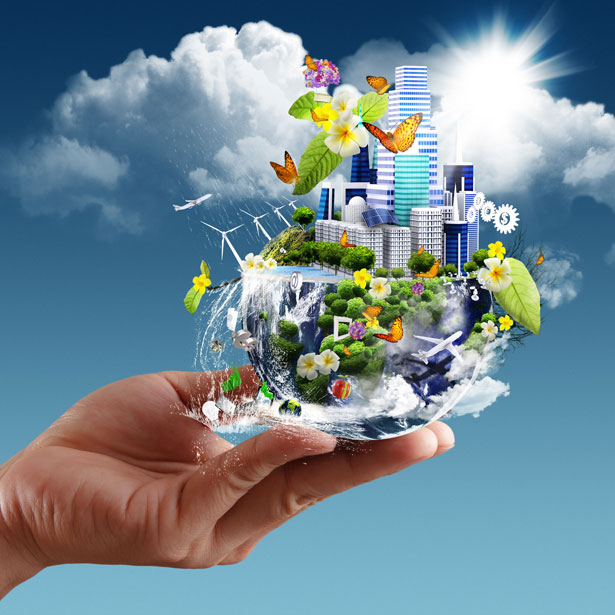 Circular Economy: definition and examples – The model of economic growth that has characterized the last 150 years of history is defined as “linear economics”, an industrial, market economy, based on the extraction of innovative raw materials, on mass consumption and on the production of waste at the end of the useful life of the product. An economy for the masses, through and through.

This flow of material extraction and discharge of material has led to damaging environmental effects, such as the contamination of seas and soil, waste disposal issues, emissions of greenhouse gases responsible for climate change, bloody wars over the control of raw materials, strong social inequality.

To elaborate a model of development alternative to that of the linear economy, illustrious thinkers such as the architect Walter Stahel, the physicist Amory Lovins, the designers McDonough and Braungart, the green economist Nicholas Georgescu-Roegen have elaborated different ways to stop material from being wasted, to stop fossil fuel pollution, and to promote efficient production, recycling, eco-friendly design, and renewable energy sources.

The result of all of these years of research and experimentation for a more sustainable world comes together in the concept of a circular economy, which is an economic model that seeks to reduce and eliminate waste, differentiate the source of procurement of materials, and make longer-lasting materials, maximizing the usage value of consumer products.

The classical definition of a circular economy is that of “an economy planned to be able to restore itself. In a circular economy, material flows are of two types: biological ones, designed to re-enter the biosphere safely and build natural capital, and technical nutrients, which are designed to circulate at high quality without entering the biosphere”. This is a definition that comes from the work of the Ellen MacArthur Foundation, one of the most active participants in the promotion of this model of development, and is financed by the sailor Ellen MacArthur and supported by industrial giants such as Google, H&M, Banca Intesa, and the World Economic Forum.

To better understand how a circular economy is structured, we first need to explain the three pillars upon which it is built.

1) The first pillar is that of rediscovering deposits of discarded materials as sources of material, limiting as much as possible any processing. This means collecting everything that we throw out, both from private residences and industrial sources, and reintroducing it into the cycles of production. Like in the natural world, where nothing is wasted and every discarded scrap is a source of nutrition for some other organism, the same has to be true in economic production, from agriculture to heavy industry, and can be achieved by recycling, reusing, managing production output, and regeneration. These are the fundamental practices for transforming waste into “secondary raw materials”.

The best place for the “extraction” of these secondary raw materials are cities, which become the new (urban) deposits from which to tap the resources to produce new material goods. When you look at differentiate waste containers, in the circular economy, you shouldn’t think of “garbage”, but of a system of material extraction for which you are the unaware miners.

Let’s look at some examples. Beyond the classic plastic, paper, and glass recycling, today there are “recycling centers”, or waste recovery centers that employ artisans and artists who adapt and reuse discarded material to make new objects and sell them. In Italy the most well-known centers are Ri-Uso in Capannori and C.R.E.A, the Center for Reuse and Environmental Education in Valsugana, Trentino.

Ecopneus is one of the most modern and efficient consortiums of waste collection in Italy. Specifically, they collect used tires. From the unusable tires, they are able to derive acoustic insulation, granules for paving sports fields, material for building construction, and even new tires, thanks to the revulcanization procedure.

The most advanced types of recycling can be called “upcycling”, which is when the processed waste gains a value as a new material greater than that of the product in its previous life. The examples of upcycling in circular economies are many. Aquafil, producers of nylon filaments, have created a system called Econyl that adds value to discarded nylon. Econyl uses the polyamide 6 or Nylon 6 sourced from industry and consumer waste to produce new Nylon 6, increasing its quality at the same time.

The key to success is the program Reclaiming, an instrument to facilitate an inverse supply chain and guarantee reliable material flow. On one side, the filament arrives from disassembled carpets. On the other side, the company in Arco, Trentino, together with Interface in Atlanta, USA, has realized a project to obtain nylon from old fishing nets, thereby instituting an inverse supply chain that takes a mediocre product, such as the used nets, and transform them into synthetic fiber for the production of new, stylish carpets sold by the American company Interface.

Another good example of a circular economy: a start-up from Rovereto, Eco-Sistemi, which has its seat within Progetto Manifattura, the hub of green and circular economies. Eco-Sistemi employs old plastic bottle caps as carriers in water purification plants, or containers that hold the bacteria that eat the waste material in the dirty water.

From an organic point of view, agricultural and food waste are a real gold mine, waiting to be taken advantage of. Vegea is a company that creates leather from vegetables, while Wineleather creates leather completely from leftover crushed grapes. In California, the start-up Oryzatech is experimenting with creating construction blocks from rice production waste; NU-OVUM creates a bio-plastic using the thousands of tons of eggshell waste that are produced every year in Italy. There are hundreds of examples. 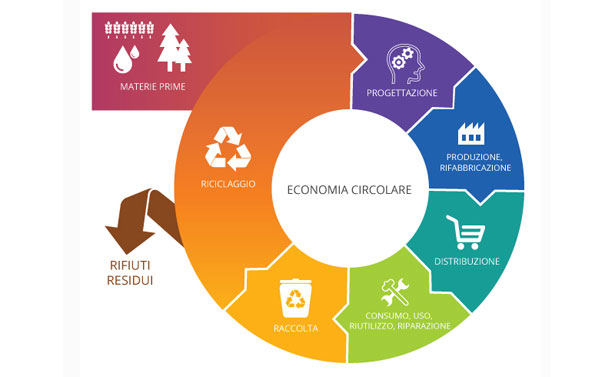 2) The second principle is that of eliminating the unused value of a product, instead of throwing it away. There are warehouses full to the brim with machines waiting to be discarded, boxes in basements filled with unused clothes, objects bought and used once a year. A useless depreciation of assets whose value was not taken advantage of.

Look around yourselves with a new pair of eyes and you’ll see how much stuff is lying around uselessly, wasted, before being definitively thrown out, after not being used. Neglected stuffed animals, abandoned in the wardrobe with other childhood keepsakes. The rest is just a waste of material. The solution? Sharing with other consumers and creating commercial processes where instead of possessing an object, it is used as a service (product-as-a-service).

Examples of a circular economy, of products as a service, are in front of our eyes. A classic example used in literature is that of car-sharing. A car owned privately is used for only about 4$ of its lifetime, whereas the cars and motor scooters shared with services such as Enjoy, ZigZag, Car2Go, SharenGo are used fore more than 45% of their lifetime. Companies such as Toyota offer short-term leasing systems, with the ability of buying the car or returning it at the end of the lease. Fablab such as the Italian company Witlab or tool-sharing companies such as the Tuscan website Toolsharing.com share tech and hardware devices, from 3D printers and lasers to chainsaws, drills, and even bulldozers. You pay according to consumption, and there are additional assistance and planning services available. Michelin offers tires in the form of “product-as-service”. Thanks to Michelin Solution it is possible to lease tires, with an agreement on the performance. Since 2011, Michelin Fleet Solutions has made contracts for over 300,000 vehicles in over 20 European countries. Since they maintain full control over their tires, Michelin can take them back at any moment when they are about to be critically worn out, thereby having the possibility to reconstruct and rework them to be resold.

3) The third pillar is to stop the premature death of materials. Although recycling and reuse are essential strategies for recuperating material, we often condemn to death – or dismissal – of perfectly healthy materials. Often only a part of an object becomes broken or worn out, while the rest of the components remain perfectly functional. Or fashion may declare a dress or design feature to be “dead”. Repairing, upgrading, and revising the practices of planned obsolescence, or being out of style, are desirable strategies to stop this foolish massacre of materials.

Fairphone, for example, is the first telephone that was designed to guarantee longevity and repairability of the product in order to maximize its average useful lifespan and allow its buyers to have total control over modifications, upgrades, and repairs. Instead of changing cell phones when you want a better camera or processor, you can upgrade one piece at a time. It is easy to repair and is design to be easily taken apart at the end of its useful life.

Patagonia, the well-known producer of sporting clothes, has launched a product called Worn Wear, which promotes around the world the philosophy that “repairing is beautiful”, doing away with the adage “buying a new one costs less”. In the stores and at dedicated events, it’s possible to receive free assistance for repairing the clothes. The simple gesture of making the clothes that we wear last longer, taking care of them, and repairing them when necessary allows us to avoid buying new ones, thereby avoiding the generation of CO2 emissions, the production of waste, and the consumption of water associated with production cycles in the textile industry.