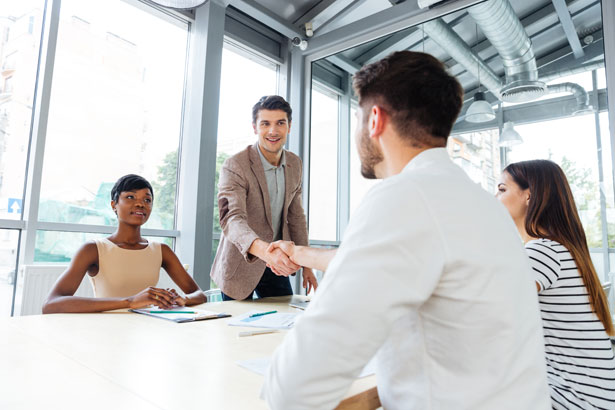 Already widely used abroad and encouraged by the EU, environmental mediation finally arrives in Italy. Since December 2015, the Milano Chamber of Arbitration (CAM) has expanded the field of action of mediation, using it to deal with environmental conflicts. In fact, this tool allows all subjects involved in an environmental litigation (citizens, businesses, public administrations) to open a discussion table in order to find concrete solutions to equally concrete and pervasive issues such as the environmental ones. Since then, CAM has managed 17 cases of environmental mediation; the following statistics take into account those managed between 01/12/2015 and 30/09/2017.

In Italy, there is a so called ‘mitigated’ mandatory mediation system, where the parties are required to sit down with a mediator for a preliminary meeting (first meeting), instead of having to go through, and pay for, a full-blown mediation. During the meeting, the mediator illustrates the procedure and invites the parties to comment on the possibility of starting the mediation procedure. If any of the parties is not persuaded that mediation has good chances to succeed, they can ‘opt-out’ (“No Initiation”) from the process during the preliminary meeting and go directly to court. For this particular reason we divide the outcomes as it follows.

Legend:
Agreement: when an agreement is reached between the parties.

No Agreement: only the mediation proceedings that go beyond the “first meeting” and that have not reached an agreement.

No Initiation: these are the “first meetings” of mediation that have as a result, the will of at least one of the parties that to not continue the environmental mediation.

On-going: all the practices that have not yet been concluded.

Graph. 2 is interesting as it mainly shows the outcomes of the first meeting, if all the parties appeared at the meeting. In fact, there are cases where the parties do not appear at all to the scheduled appointment. These mediations (which correspond to 23%, Graph. 1) are considered null because the first meeting has not even taken place. Therefore, it is  interesting to understand what are the outcomes of environmental mediations, once the parties are informed and have considered it.

Graph 3 – Outcome of the proceedings passed the 1st meeting 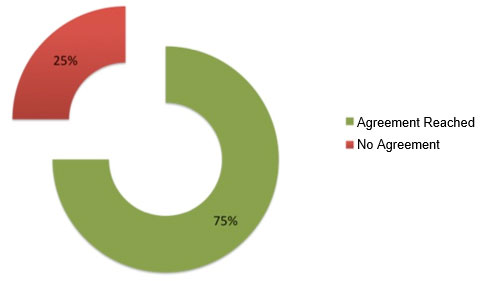 Some considerations can be made on these first three charts.

First, the positive results of the last graph are often also driven by the will and the need of the parties to find effective solutions to protracted conflicts. As we will see in the analysis of some practical cases, CAM dealt with controversies that started over 15 years ago and that have already gone through several judgments without ever finding concrete solutions to their problems. This phenomenon is generally caused by the slowness of Italian courts, which can do little to resolve environmental issues that generally need to be solved quickly, not only to avoid an eventual propagation of the damage (e.g. a soil contamination that is likely to infest the nearby aquifers), but also to be able to restore the sites (the restoration of environmental damages is a legal prerogative of the and national EU laws).

Second, if you sum the cases where the mediation is not initiated at all or the parties do not appear at the first meeting (Graph. 1), the total of them reaches 41% of the total cases. This rather high percentage reflects the difficult position of the public administrations. Indeed, their very high presence (as will be seen in the next charts) affects the outcome of environmental mediations. Too often the public parties involved do not feel able to sit at the mediation table and prefer to resort to the traditional judgment (the court). Their position is not very flexible because of their legal and civil responsibility and the consequent fear that the Court of Auditors considers environmental mediation and a possible agreement (which may sometimes refer to large sums of money) an inadequate cost.

*The status refers to: O = On-going; A = Agreement; NA = No Agreement; NI = No Initiation; NAP = No Appearance

To illustrate the above, we have chosen three particularly significant cases. The numbering of each case corresponds to Table 1.

15 years of legal proceedings, several judgments from the Administrative and the Civil Courts, 3 public parties, 1 excavator company, value of the dispute: more than 1 million euros. The case revolves around an excavation site, now in disuse, and its destination. There are huge debts being claimed by public bodies for environmental damage (about 1 million, recognized by a passed judgment) and administrative fines for mining activities. An intricate case that seems impossible to solve given the complexity both legal and technical. Not only the various judgments failed to find a solution to restore the environmental damage, but the legislation itself is not easy to apply, given the technical and scientific complexities of the case.

The company, however, now bankrupt, is unable to pay this huge debt and the site in question has been in disuse for over 15 years now. Nevertheless, the company showed interest and willingness to evaluate alternative proposals to satisfy its public creditors. Among the proposals currently that are being evaluated, for example, there is the free transfer of the land of the company to the local public administration, together with the preparation of an environmental re-qualification project of the areas, drawn up according to collectively identified criteria.

This mediation has several factors of complexity. The challenge is to find a solution that satisfy the high public credit (only for environmental damage, regional credit is about 1 million euro), even in the presence of a debtor company that claims to have no liquidity; the public interests involved are manifold and concern various administrations; there are passed judgments, whose execution in alternative forms raises issues of respect for the monetary obligations of the public bodies. In addition, the dispute is strongly localized, as it develops on a very precise territory, involving a very rooted local company and the three public bodies that are best placed to represent the public interest, triggering very strong reputational and personal mechanisms. Moreover, the public utility nature of the sector in which the company operates makes this conflict even more intricate. Last but not least, scientific complexities have led to the need for technical assistance throughout the mediation process, the contribution of which has been fundamental to ensure that all the parties understood all the information presented.

Even in the presence of such criticisms, this is a very interesting case, as the possible positive conclusion of the mediation attempt – while not fully satisfying the credit of the administrations – would allow a close-down of a contingency that has lasted for years, with an important benefit for the community, in terms of returning to the public viability of the areas concerned, and for the territory and the environment, in terms of environmental restoration of areas strongly affected by the anthropic activity.

The hypothesis that is outlined includes in fact the points listed below. 1. Restoration of the affected areas, but only a slight one. The areas in question have been stationary for 15 years due to environmental controversy and therefore nature has already been able to reinvigorate them. 2. The dismantling of industrial equipment. 3. Land sales to cover the huge fines that the company has accumulated in the various processes. The strong presence of public administrations, which can make decisions only after public councils or joints, and technical complexity, have prolonged the mediation for over an year.

This case is a perfect example of the difficulties of public bodies to start mediation.

A real estate company makes an important investment of € 600,000 as a substitute for monetization of standard area sales. However, the real estate operation is blocked by the Administrative Court which was appealed by the citizens gathered in a special committee. As a result, the property asks for the return of the sum, without success. It therefore activates a mediation process, but the public body refuses to participate even to the first meeting. Refusal is justified by the fact that:

“With regards the mediation in object, this body does not intend to adhere to it, being a controversy that belongs to matters reserved to the exclusive jurisdiction of the Administrative Court, to which the Law Decree 28/2010 is not applicable.

This is a question of patrimonial rights arising from urban planning conventions.

It is appreciable the lawyer’s attempt to propose an environmental mediation on a matter for which a public closure attitude is foreseeable. In this case, the Public Administration seems less open to the idea of ​​using mediation, which is perceived as an element outside the administrative procedure and hence to be distrusted. In fact, the answer is very bureaucratic and sends the decision to the administrative court.

This case is very interesting since the dispute has not yet arisen and the mediation is called as a preventive act. A logistics company with multiple venues has called in mediation several public bodies to find a preventive agreement, with the objective of avoiding possible future legal causes because of its nocturnal activity-related noise.

Over the years, the area around the company’s operating venues has changed, transforming from industrial or rural areas to residential areas. This very common phenomenon is due to the expansion of the urban area. Nonetheless, the company has felt obliged to prevent any legitimate cause by its neighbours due to night-time noise-related cargo and unloading, to which other companies operating in the same sector have been subjected.

Over the years, the noise classification of Lombardy has changed: the Land Governance Plan (PGT) has been replaced by the General Regulatory Plan (PRG), an urban planning tool at the municipal level that aims to define the overall structure of the municipal territory. This has created a lot of confusion in the identification of the various zones and their acoustic classification. In fact, apart from industrial complexes, residential complexes have been built in the former industrial areas. The company asks that the areas in which they operate are properly classified acoustically so that they can be reported to anyone building near one of their establishments.

There is therefore a confrontation and an exchange of information that lasts three months in which the public administration takes into account the company’s demands for the upcoming revision of the urban zones and acoustical classifications, and vice versa, the company acquires knowledge of the management of the territory and what are the possible future scenarios.

The assistance of technicians and lawyers has been critical to understanding of all the technical details of both scientific information on the construction and use of materials, as well as legal details on permitted noise thresholds and other relevant regulations. In fact, even though the parties were only 2, the total number of people sitting at the table was 11, excluding the mediator; in other words, there were more technicians than real representatives of the parties.

In this case, no agreement was reached since the mediation was predominantly advisory and preventive, but the work done was a lot and there was an important exchange of information.