How to get rid of moles in your yard 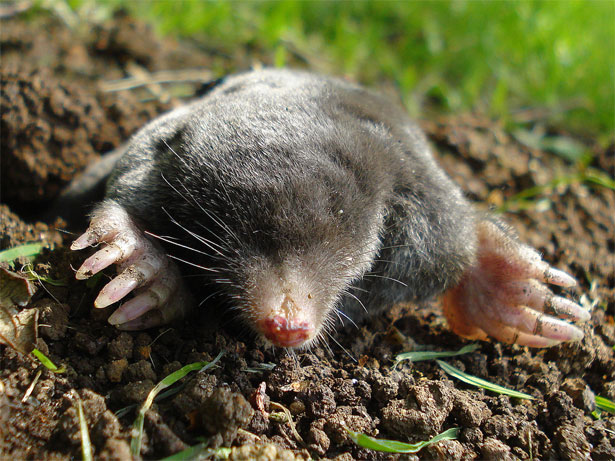 How to get rid of moles in your yard – The last thing anyone would want to happen in their well curated garden is for it to be visited by little furry creatures that make it their mission to mess it all up. If yours shows signs of tunnelling and mounds of dirt thrown onto the lawn, it’s clear: you’ve got moles.

They are completely undesirable and they hard to get rid of. So here’s some information you may find useful if you’re in a mole-or-less critical situation.

Most moles share common features, which makes it a bit difficult to identify at first sight. They are generally small in size and covered in dark fur, have a long and hairless snout, big broad paws with fiver visible fingers and an extra thumb hidden by hair. They also have tiny ears, though they possess good hearing. Furthermore, contrary to popular belief, moles are not blind — they just have very little eyes and a bad sight.

Moles are solitary creatures and spend all their lives underground digging tunnels looking for grubs, worms and various soil-dwelling insects. Though they are generally confused for rodents, moles are actually mammals, with female moles nursing their young at their breast and some even carrying them in pouches like marsupials.

The most common species of mole in Europe is the Talpa europaea. It can be easily found in the southern European countries as well as around the northern ones, to the point that it’s sometimes called the northern mole. Its characteristics are generic.

The ‘eastern mole’ is the most common species in the United States, followed by the star-nosed mole’ and the ‘shrew mole’. While the eastern mole has a long hairless snout, the star-nosed mole, as you might expect, has a start-like extension of its snout, while the shrew mole distinguishes itself by its lack of prominent wide paws and its reoccurring appearance aboveground; it is also the smallest of all common moles in the States.

All moles can swim if they need to. They have been documented to swim for up to an hour and to cover a distance of about half a mile. The star-nosed mole, for instance, is semi aquatic and often goes underwater to find food. Some mole tunnels sometimes exit into ponds or streams.

When moles are most active

Unlike what some may think, moles are not nocturnal animals. They sleep for four hours at a time, with four hours of activity in between. Moles do not hibernate, so they can be found all year round. Their breeding season is in the spring time, in April, so the likelihood of finding more mole hills increased during this period.

Moles follow their food, so when earthworms move to deeper levels in the soil, do so moles, leading us to believe that they are less active during the summer time.

How to rid the yard of moles naturally

If you want to get rid of moles, you have to get rid of their main food source: grub. They eat earthworms too, but those little guys are useful for the maintenance of a healthy soil, so it’s best to just focus on grub control to prevent continuous damage to plant roots made by the furry creatures.

A natural, homemade repellent that has been reported to work is a mixture of plant-based castor oil and dish soap. It’s cheap and it won’t damage your lawn. It may not be foolproof, but it’s worth a try.

Other natural DIY options include depositing lye, human hairballs, mothballs, garlic cloves, peppers and even pickle juice into their runways. Once again, the reliability of their effectiveness is uncertain. However, all these natural remedies don’t get rid of earthworms, so they may not be a permanent solution.

Alternatively, you can invest in an ultrasonic mole psych-out device that emits a high-pitched sound that mimics mole sounds. As previously mentioned, moles are loners, to being in the presence of another one nearby would make them go away.

The most efficient way to get rid of moles is trapping. Although there are a few options in the market, it’s best to consider a few factors before doing the purchase. First of all, consider its efficiency, as you wouldn’t want to buy something that won’t do its job properly. Second of all, safety. Certain traps can be very dangerous, as children or pets may come in contact with the sharp spears some of them have. You should also consider your investment: will the traps be useful for a long time and will you need more than one? Those are questions to keep in mind.

There are three main types of mole traps that you should consider:

Whatever you pick, keep in mind that the presence of moles in your lawn at least means that you have healthy soil. Silver lining!

Yes, moles can swim! Even if moles prefer a dry ground their tunnels may exit into ponds or streams. A recent study revealed that proStar-nosed mole can also sniff underwater and they can follow a scent trail under water so water is not a good choice if you need to get rid of moles in your yard!

Published by Carla Cometto on 19 Agosto 2017