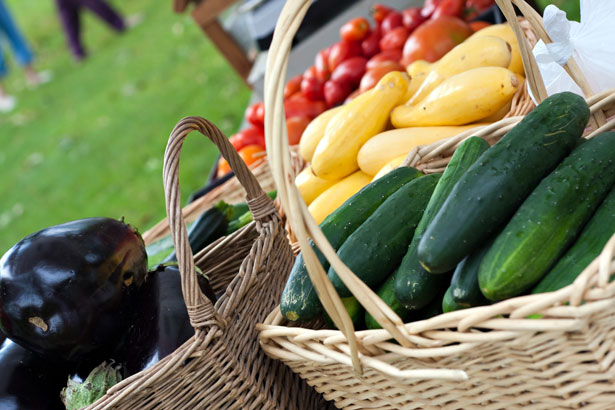 We’ve all seen the little sticker on different kinds of produce that says ‘organic’ and the steep price tag compared to their non-organic counterparts. But although we’ve been told that everything that comes from ‘green’ farms is the better choice, what does the idea of ‘organic farming’ really entail? And most of all, is it as impeccably beneficial as some say? Let’s find out.

The term organic farming refers to a production management system primarily aimed at cultivating the land and raising crops while promoting and enhancing the agro-ecosystem health, through the use of organic wastes. The biological cycles of the soil, the biodiversity and even the livestock within the system are all kept alive and in optimum health, by using recycled and biological materials able to maintain their organic integrity and vital qualities and to protect the environment. No pesticides, fertilisers, GMO’s, antibiotics or growth hormones. The agro-ecosystem is chemicals free.

Organic agricultural methods are legally enforced by many countries around the world and they are regulated by following the standards set by the International Federation of Organic Agriculture Movements (IFOAM), the worldwide umbrella organisation for organic farming organisations since 1972.

Over the last few decades, the organic industry has been growing exponentially, reaching a market worth of $63 billion worldwide in 2012.

Crop rotation and livestock manure are not the only methods used to keep the soil live and well. There are many more that one might seem simplistic at first, but hide a wide variety of advantages as indicated by the science of agroecology.

Crop diversity, for instance, consists in planting a variety of vegetable crops in order to support a wider range of beneficial insects and soil microorganisms, able to maintain a healthy balance in the soil and to protect species from extinction.

Soil management is a productive way of ensuring the integral maintenance of the soil — key method in organic farming. It uses techniques such as green manure, composting, cover cropping and reduced tillage, all with the aimed at replacing the nutrients taken from the soil by the previous crops. As tillage is reduced, soil doesn’t get exposed to air and it loses less carbon into the atmosphere, which results in more soil organic carbon. As a consequence, there’s a reduced emission of green house gases and a reduced damage to our climate.

Weed management is also another method useful to promote the soil’s health, by enhancing crop competition and phytotoxic effects on weeds. Crop rotation requires intervening crops to grow on the same location to prevent weeds of the same crop to grow again. This leads to the need for cover crops that promote the growth of natural microorganisms able to suppress the germination of common weeds. Research is still being done in order to find the most productive and organic method to grow such weed-suppressive crops.

Other methods used in organic farming include pest control, livestock and the use of traditional tools as opposed to fossil fuels.

So what are the advantages and disadvantages of this increasingly popular type of farming?

Organic farming doesn’t use any chemicals to deal with pest management. It only uses natural methods that don’t incide in the produce, the health of the soil or that of the consumer.

Adding on to the first point, the forbidden use of chemicals prevents the contamination of the soil and local water sources, while also reversing climate change thanks to its lack of green house gases emissions. This brings a great benefit to humans, animals and plant life.

Due to the lack of artificial nutrients, crops are given more time to grow, giving time to their inner sugar structure to develop and give the produce a better taste. Have you ever noticed the difference in taste between an organic tomato and a GMO one? This also leads to the healthy and integral development of their nutrients, resulting in rich and beneficial food.

Because the central aim of organic farming is the diversification of crops, it means that farmers can obtain a much more secure income than when they rely on solely one single type of crop.

The reason why there are a lot of people who are opposed to the use of organic farming is their high costs. In general, organic produce can cost up to 40% more than common foods. This is because despite all the work that’s put into it, farmers don’t get as much out of their land as conventional farmers do.

Because no fertilisers or chemicals aimed at a faster growth of the crop are used in organic farming, the productivity is much slower. So much so that it’s almost impossible for it to produce enough food to satisfy the world’s needs.

Only conventional farmers make use of genetically modified crops in order to keep up with high demands. As these GMO crops grow, they generate more seeds and so the patterns goes on. Unfortunately, it’s difficult to notice whether an organic seed has been affected in any way by GMO’s, meaning the whole idea of ‘organic’ produce could be made pointless in little time.

It takes better observation and greater understanding of the soil and the entire agro-ecosystem in order to fix any problem that’s encountered. There are no fast solutions (i.e. chemicals) to help prevent or revert certain issues with the crops, and for that only highly skilled farmers are needed to work in these farms.

Due to the difficulty in growing these crops and keeping up with the increasing markets demand for organic produce, it’s necessary to have a larger number of farmers working in the field and for longer periods of time. On the bright side, this can be used as a justification for the bigger expenses at the store…

How to start organic farming

If you have have the land and the time, considering to start your organic farm is not a bad idea. Here are a few tips for you beginners out there:

As mentioned before, it takes skills and knowledge to manage an organic farm. Therefore, investing in training courses and books is a good way to get a good background before you get down to work.

Get your soil tested.

Chemicals from other places and sources may have seeped into your soil and it may not be balanced at a nutritional level in order to support plant life. And although you could use a home testing kit to do it, it’s best to send a sample of your soil to a local agricultural extension office that will be able to tell you the exact condition of your land.

This not only will give you an idea of the crops that thrive in your area, but it will also allow you to make connections with other farmers that one day could come in useful.

Because you won’t be able to use chemicals, this will serve as your natural fertiliser to your plants. You can either keep it outside in a container inside the house.

After you start planting and water your plants regularly, you will have to spend quite some time to keep weeds from taking over the lands.You will have to grab the weeds by the roots, either with hand or tools, and ask for some extra sets of hands if they get out of control.

You should grow a variety of plants if you have the space. This will naturally keep away pests and it will provide you with more options for customers when and if you begin to sell your produce on the market. Just keep in mind the climate and the soil type.

Published by Carla Cometto on 20 Agosto 2017