Home » News » News and Events » Wars for Water: What are the Water Wars

Wars for Water: What are the Water Wars 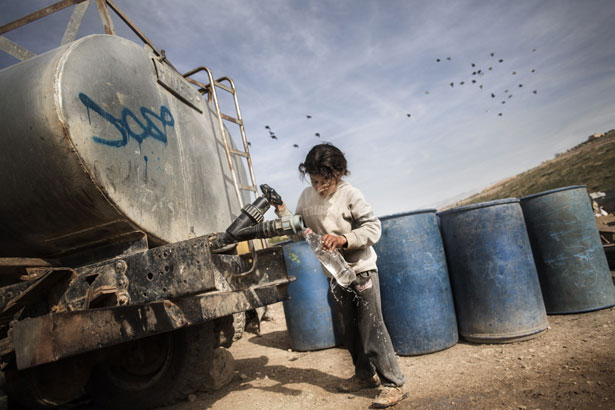 What happens when water starts to become scarce? The first consequence is the collapse of the production of foodstuffs, such as corn or rice. Climate change, water grabbing, inadequate infrastructure, price increases due to privatization, competition with other sectors (e.g. production of electricity from fossil fuels): the causes are many. But the consequence is only one: conflict. Academics call them “water wars”, wars and conflicts fought for water or the lack of it, linked particularly to agriculture.

In the Hollywood image, the most celebrated and popular example is that of Mad Max: Fury Road, in which power is no longer in the hands of he who controls petroleum, but rather in the hands of he who posses water. A desert world, post-climate disaster, where the crowds adore the super-evil who keep them bound by releasing cascades of water upon them.

But the dystopian world of Mad Max might not be so distant from the reality of some regions of the planet. If in the 20th century many wars revolved around petroleum, from Iraq to Afghanistan, from the fall of the Shah in Iran, to the attempt of the Germans to block the supply of petroleum to England from Central Asia, today, slowly, new conflicts are constantly being developed around the theme of land (land grabbing) and water (water grabbing).

In the so-called Global South, but also in some industrialized countries, water has transformed from a common, freely accessible resource into a private commodity, or controlled by whoever is in power. Under the forces of the growing demand for water due to population growth and industrial expansion, and under the grip of climate change, always more evident in our daily life, water has become a source of conflict, a scarce resource which is essential to hoard at the cost of one’s neighbors, to the detriment of women and children as well, who handle the daily harvest, loosing time that could be dedicated to education or work.

The list of conflicts over water is constantly growing. From the drought in Syria, which contributed to the exacerbation of one of the worst conflicts of the last fifty years, to the global drought of 2016 that added 50 million people to the list of the population suffering “extreme hunger”, to the tragedy in South Sudan in the beginning of 2017, where people literally killed one another for the little bit of water left in the wells, to the protests in Bolivia and Chile against the privatization of water resources.

In the following graph you can see the growth of conflicts attributed to control over water in the course of the last 40 years. Clicking on the graph, you can see all the data back to 1950 in full-screen.

In this second map made by Riccardo Prevettoni, with data from FAI, WRI Aqueduct, WHO UNICEF and Pacific Institute, you can see where water conflicts emerged between the years 2011-2015, the percentage of the population without potable water (shown by the different colors) and the percentage of population suffering from malnutrition. The correlations are immediately evident.

To see the full-size map in a new window, click on the preview image below: 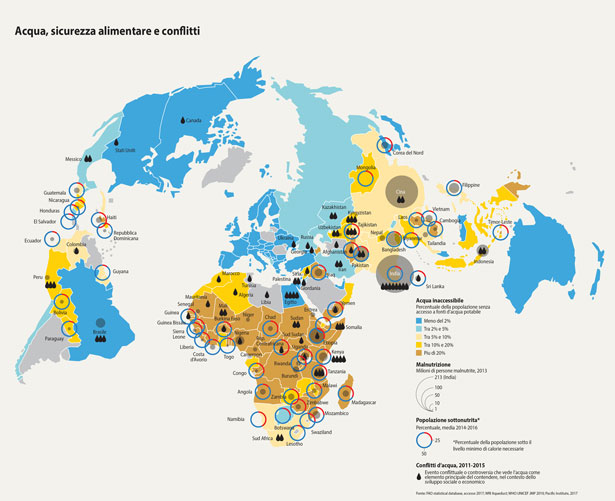 In some cases, these conflicts can grow to an international scale. One of the hotspots is the Indus River, which nourishes the agricultural and energy sectors of two long-time enemies, India and Pakistan. The large outflow of water for farming has often unleashed harsh political invectives on both sides, without – for now – giving way to a real escalation.

International tensions are also growing in Africa. Especially in Ethiopia, where great hydrological projects, such as the Grand Renaissance Dam, built along the Blue Nile, have pushed the Egyptian government to threaten retaliation should the river run low in water and nutrient-rich sediments, which are so important for agriculture. Similar tensions are also growing in neighboring Kenya, which has recently protested against the Gibe III Dam, which could cause a drastic reduction in the water level of Turkana Lake, a source of sustenance for tens of ethnic groups in the region, which researchers, such as the expert Sean Avery, assert could give way to a series of tribal wars for food and water.

Another area under the watchful eyes of international geopolitical experts is the hydrological basin of the Mekong, a river being competed over by the surrounding states.

The Mekong (whose name means “mother of the waters”) is considered the giant of Indochina, 12th in the world in terms of flux (475 km2 annually). Its length is estimated to be 4,880 km and the basin has an extent of 810,000 km2. From the high plateau of Tibet, the river crosses the Chinese province of Yunnan, Myanmar, Thailand, Laos, Cambodia and Vietnam, providing nourishment to over 200 million people. Its waters support the growing of rice along its entire length and it is a fishing resource for over 60 million people.

The abundance of the river has allowed, for thousands of years, the flourishing of prosperous kingdoms, like that of the Khmer, and has sustained hundreds of indigenous communities who have always lived in harmony with the Mekong. In the last few years, however, a series of factors are altering the equilibrium. The most important are the construction of over 39 mega-dams along its course, the change in the amount of water flowing due to climate change, and the growing withdrawal of its waters. 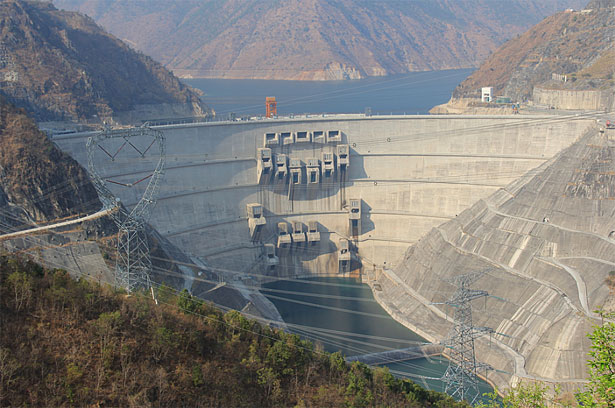 One of the giant dams along the Mekong in Chinese territory

“The future water crises threaten to slow down the key sector for alleviating poverty in Southeast Asia – agriculture”, maintains Brahma Chellaney, author of the book Water, Asia’s New Battleground. “The risk is that political tensions related to the Mekong could explode if the states do not cooperate to confront the new challenges”. The dams in particular are considered a destructive element. China has constructed seven huge hydroelectric plants in the upper Mekong, while another 21 are being planned. In the southern part of the basin, 11 of them are being planned, mostly in Laos, one of the poorest countries in Asia, which aspires to become the hydroelectric battery of Asia, with a potential production of 26 gigawatts. An energy boom, but at what cost? The association International Rivers affirms that “the dams could reduce fishing considerably, limit the flow of sediments and elements for agriculture, impacting food security and putting the Mekong Delta at risk, beyond just forcibly misplacing hundreds of thousands of inhabitants”.

Photo credits: photos from the opening of Gianluca Cercere.

Interactive map: “Water, Food Security, and Conflicts” by Riccardo Pravettoni based on data from FAO, WRI Aqueduct, WHO, UNICEF, and Pacific Institute. Infographic by Federica Fragapane.