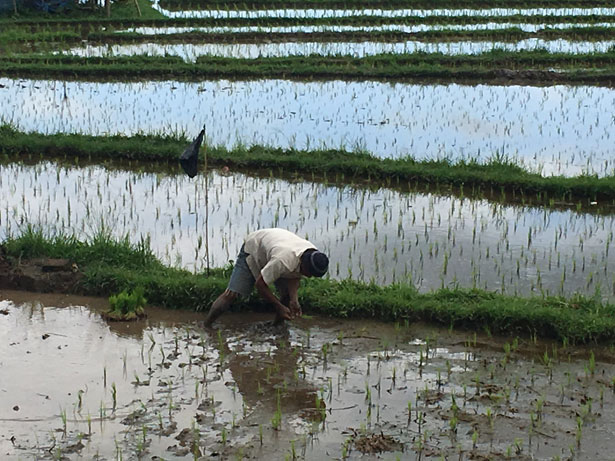 Water footprint and real consumption of water – we consume much more water than that which we see. Each one of us needs, every day, around 2 L of water for hydration, 30 to 50 L for domestic use (cooking, cleaning, etc.) and several thousands of liters per day for food. Why?

The production of any type of agricultural good – therefore food – is based on the process of evapotranspiration, which is the passage of water from the soil to air by the transpiration of plants and evaporation from the ground. Many factors are at play to determine the amount of water involved in this process, including climactic factors (for example: temperature, rainfall, wind, irradiation), the characteristics of the soil, the type of cultivation, the agricultural technique. Since the water involved in the growth process of a crop (grain, for example) is not visible anymore around the good produced (bread), it is called virtual water.

The term virtual water was coined by the English geographer Prof. Tony Allan in the beginning of the 1990s and his article in which the term first appears is ““Fortunately there are substitutes for water otherwise our hydro-political futures would be impossible”, “Priorities for water resources allocation and management”, ODA, London, pp. 13-26 (1993).

Starting from the concept of virtual water, the idea of a water footprint has been developed, which is an indicator of the consumption of water along all the phases of the production process of a good (cultivation, transformation, packaging, transport, distribution). Since cultivation is the most water-demanding step, when talking about water footprint we are mostly concentrating on agricultural goods. Agriculture absorbs around 70% of the total fresh water present on the planet that we use, and up to 90% in very arid countries, entering into competition with other types of use (domestic, industrial).

Water footprints are calculated considering the water used for production of a good, directly and indirectly. For example, for the production of cotton jeans, it’s not enough to consider just the water necessary for the material manufacturing and coloring phases, but we must also include the water that was necessary to produce the cotton, the raw material for the jeans. In this way, we can calculate a water footprint of 8000 liters for one pair of jeans.

At an individual level, the consumption of food represents 90% of our daily water consumption. In a cup of coffee there are 132 liters of water hidden, 250 liters in a cup of milk, more than 15,000 liters in a kilogram of beef (data from Water Footprint Network). This water, furthermore, is not all equal: in moist climates, the production of food happens without needing to resort to irrigation, and is therefore linked to sources of precipitation (green water). On the other hand, in more arid climates or in dry seasons, for example in a Mediterranean climate, irrigation is essential to provide for the lack of moisture, and the water used is taken from subterranean or superficial (blue water) sources. Water footprints therefore have two components: a green water footprint and a blue water footprint, to which can be added a gray water footprint, that measures the amount of pollution caused by the production process.

If you want to calculate your water footprint right away, even if with a certain margin of approximation, you can use the designated calculator available on the site www.waterfootprint.org.

The water footprint varies not only as a function of the type of product (for example, products of animal origin have a much higher water footprint than vegetable products), but also of the place and the moment in which the production of that good took place. The water footprint of nectarines produces in Italy is equal to 450 L/kg, while in China 1,120 L/kg are required (data from Water Footprint Network). Between these two cases, the amount of water coming from irrigation (blue) or not from irrigation (green) will also vary. Why is it important to distinguish between the colors of water in the water footprints of the products that we consume? Because the two types of agriculture have profoundly different impacts on the environment. The irrigation practices allow for an increase in agricultural production, but are generally associated with salinization and alkalization of the terrain, depletion of underground water, and the worsening of water quality.


Our water footprint varies with our diet. That of an inhabitant of Milan is approximately 5,600 liters of water per day, due to a high consumption of sugar, vegetable oils, meat and dairy (data from Vanham & Bidoglio). Our water footprint as Italians ranks us as number 4 in the world on the list of highest individual consumption, after the US, Greece, and Malaysia. 51% of this water, furthermore, arrives from abroad from international commerce, which can be considered “virtual water commerce” (data from WWF Italy). The importation of cotton from vulnerable countries in a hydrological point of view such as Egypt, Pakistan, and India contributes to worsening the scarcity of the water resource.

It’s called virtual water because we don’t see it, but its impact is more than real.

Since 2008, I have worked on sustainability related to water management, agriculture, food politics, and international commerce.

After a Master’s degree at the School of Oriental and African Studies in London, I obtained a doctorate in geography at King’s College London with a thesis on the commerce of virtual water in the Middle East and North Africa.

In recent years, I have worked with the Swiss Federal Institute for Aquatic Science and Technolofy, the European Mediterranean Center for Climate Change, The IUAV University of Venice, Rome Tre University, and the Barilla Center for Food and Nutrition.

After many years of study, in 2013, I sought to make the most of what I learned, co-editing the book “The Water That We Eat”, published by Edizioni Ambiente.

If you want, you can buy it online on Amazon by following this link. 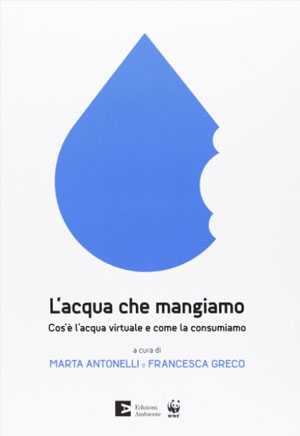